At APLAS 2018, we made a paper presentation on Egison pattern matching system. The following are our slides and script. We can download our paper from Springer and arXiv. 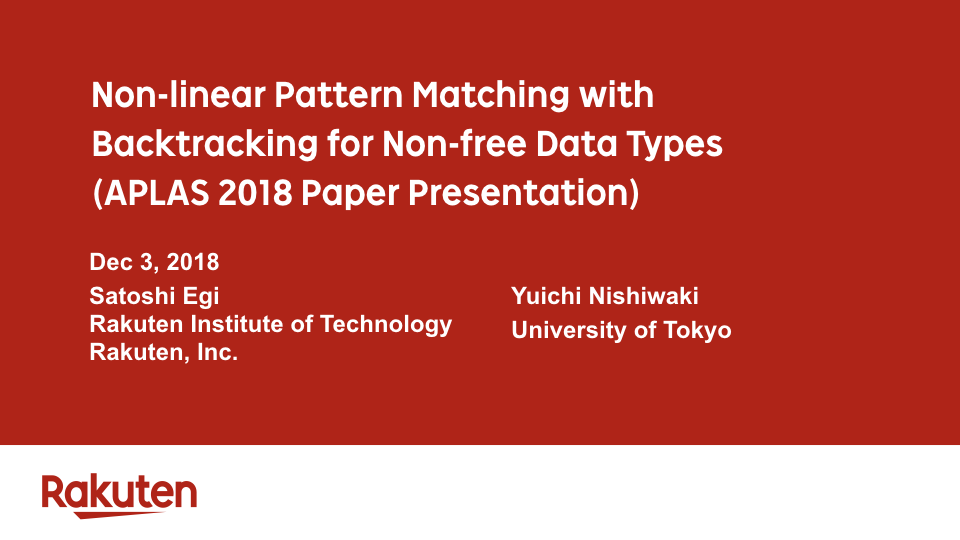 Good morning everybody. Thank you for inviting us today. I am happy to be here. Today, I'd like to talk about our new pattern-matching system for non-free data types.

In RTC 2017, I made a presentation on Egison. The following are slides and script for that. 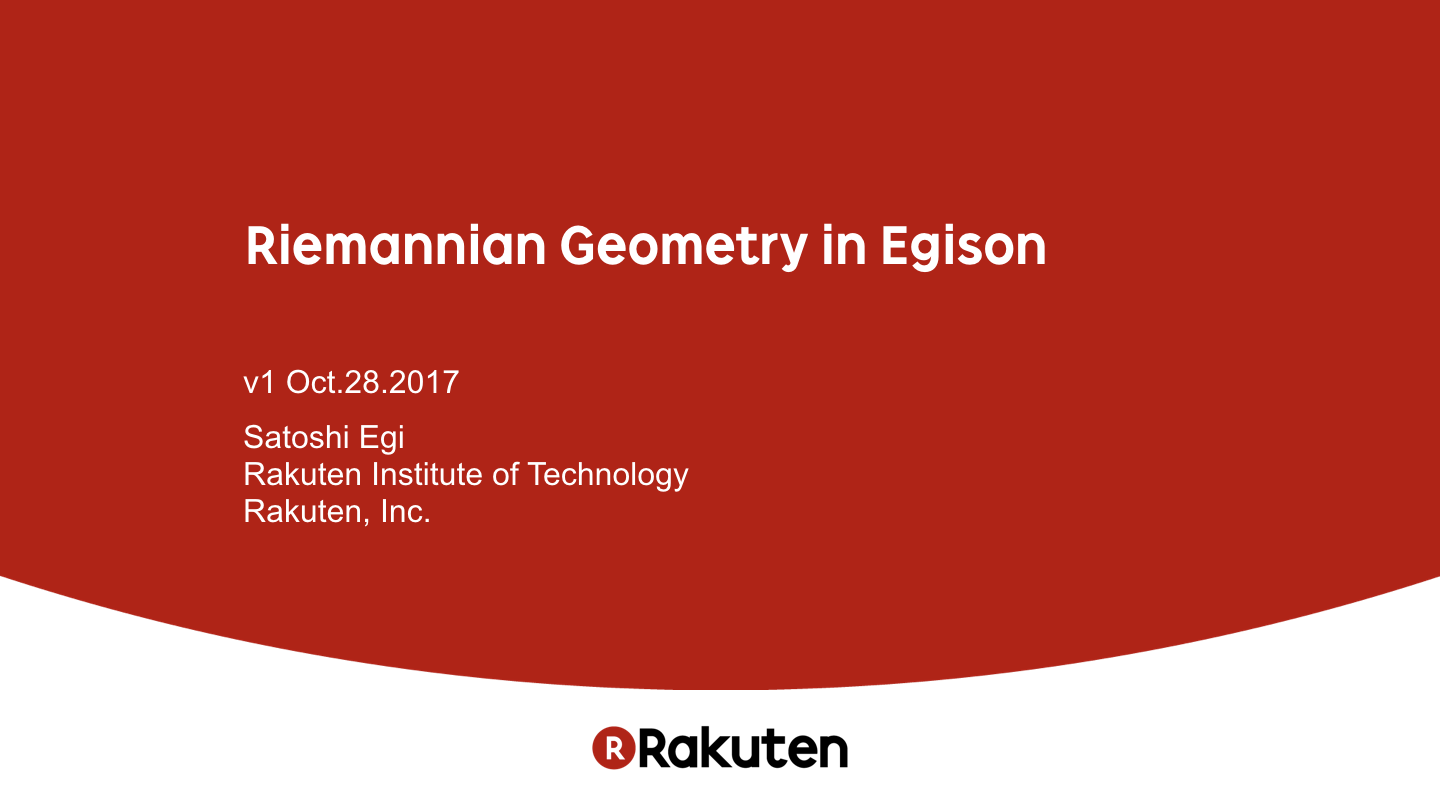 Hello, everybody! Thank you for coming my session.

Today, let me introduce my programming language Egison by showing its features that are useful for describing calculations in Riemannian Geometry.


Egison Presentation for the Scheme and Functional Programming Workshop 2017

In the Scheme and Functional Programming Workshop 2017, I made a presentation on a new feature of Egison. The following are my slides and script. We can download my paper from arXiv. 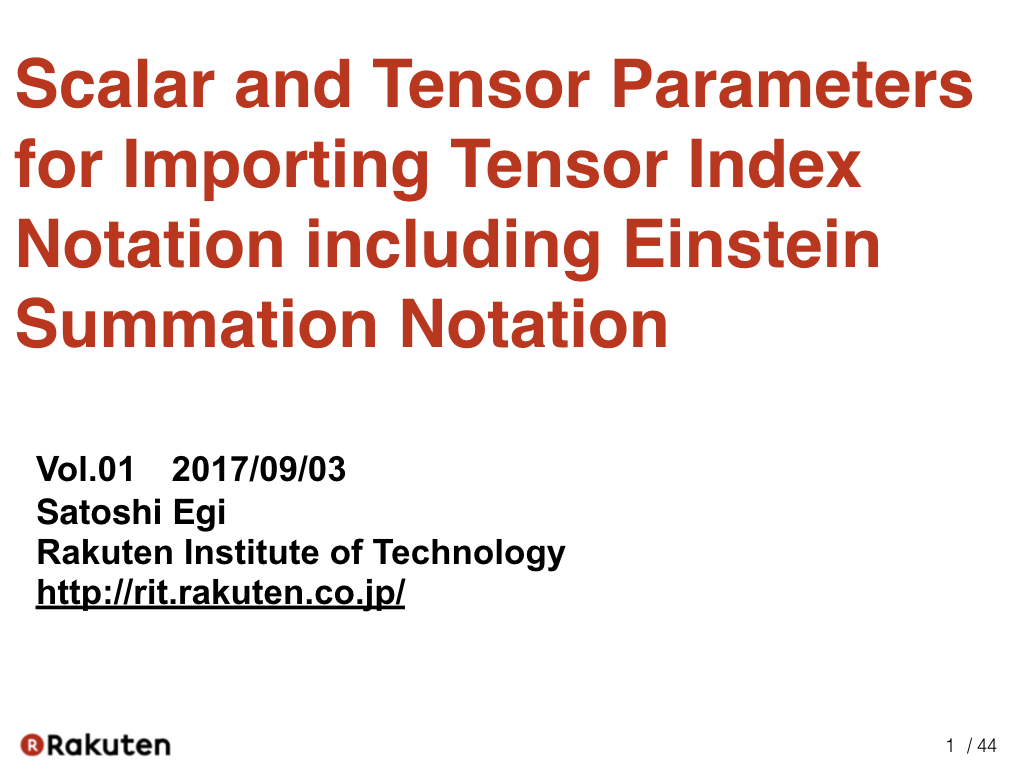 Hello everybody. I am happy to be here. Thank you for inviting me. Today, I’d like talk about my method for importing tensor index notation including Einstein summation notation into programming languages.

In RTC 2015, Matz and I gave a presentation on the thought behind the creation of programming languages together! The following slides and script are my part. We can see the video of our session on YouTube. 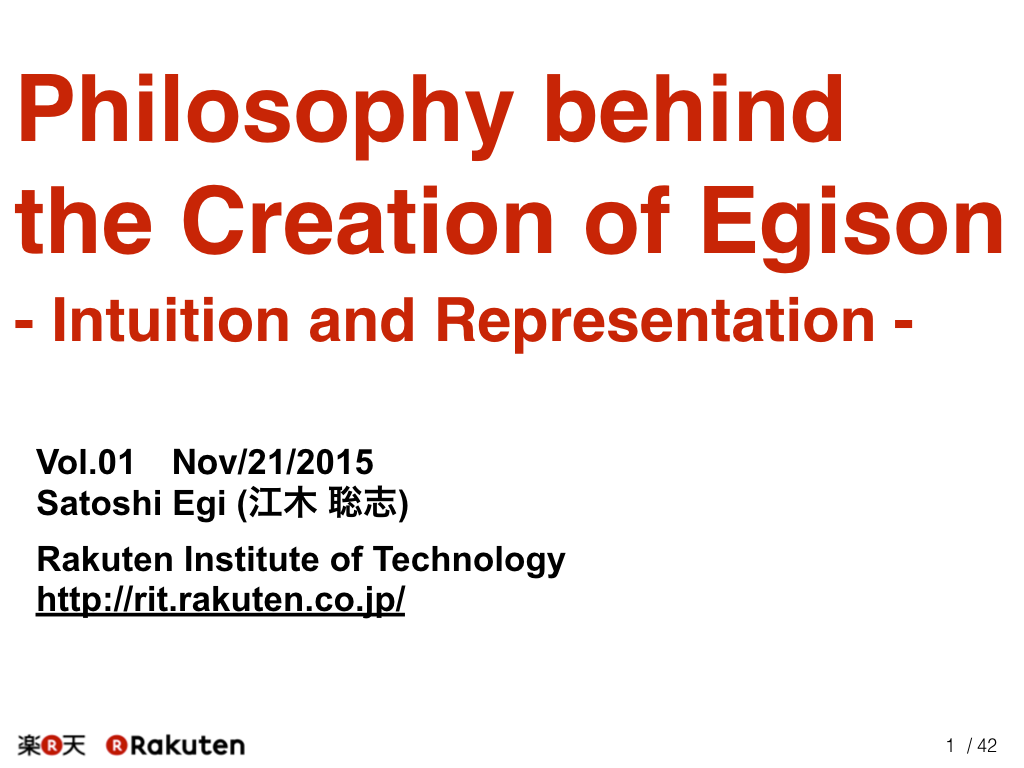 Today, I’ll make a presentation on the thought behind the creation of Egison. Here is the slides and script for that.

Solutions of Project Euler's problems in Egison are interesting demonstrations of Egison.
I have been sometimes writing solutions for these problems.
Actually, some problems helped me to find new ideas or fix performance issues in Egison.

We have prepared the utility libraries to solve Project Euler.
We can install them with the following commands.

The usage of these libraries are in the following pages. 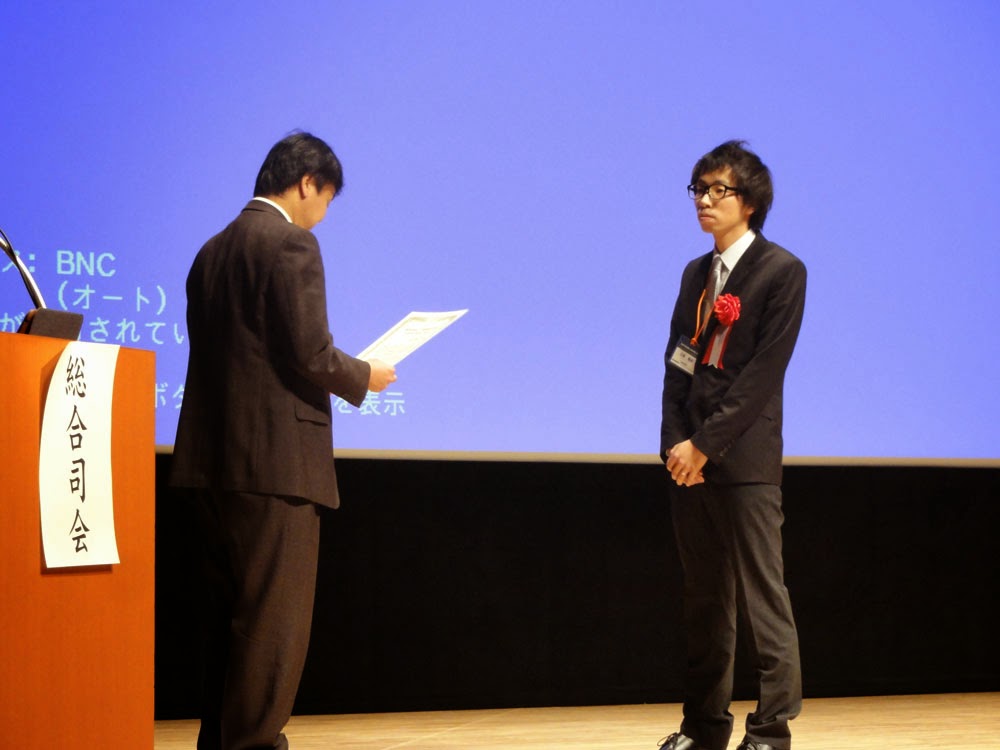 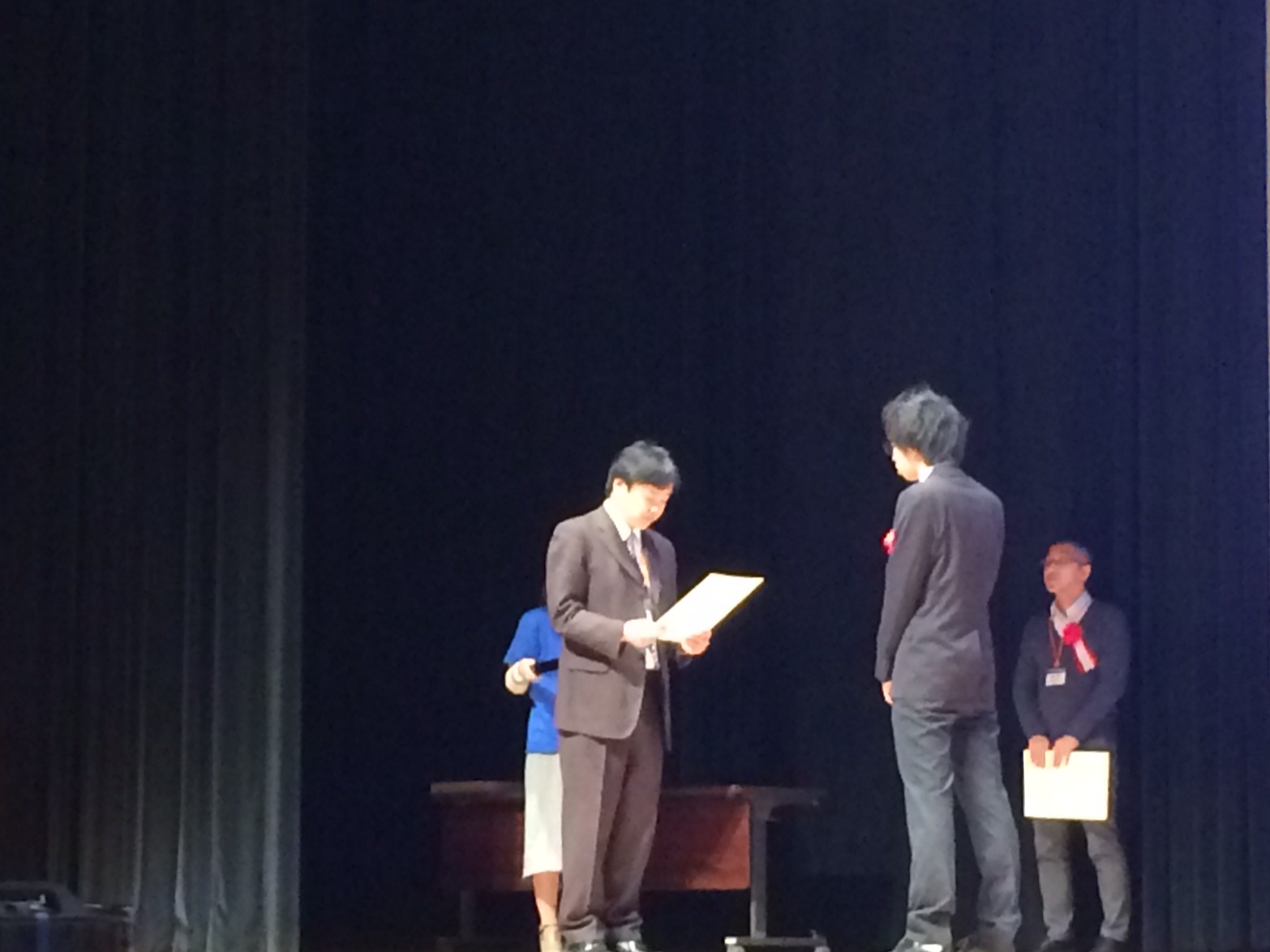 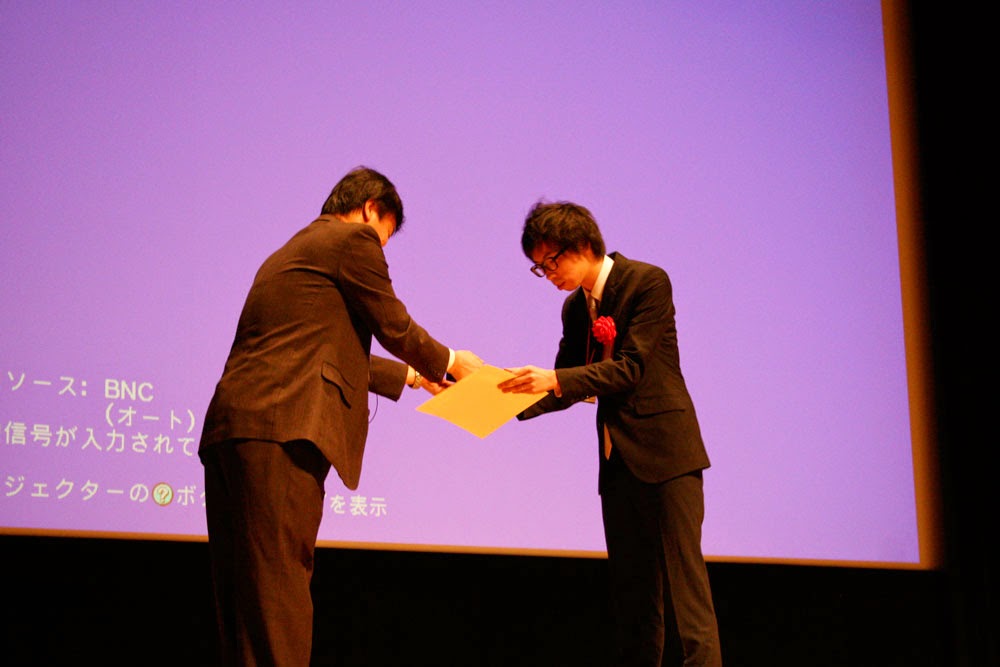 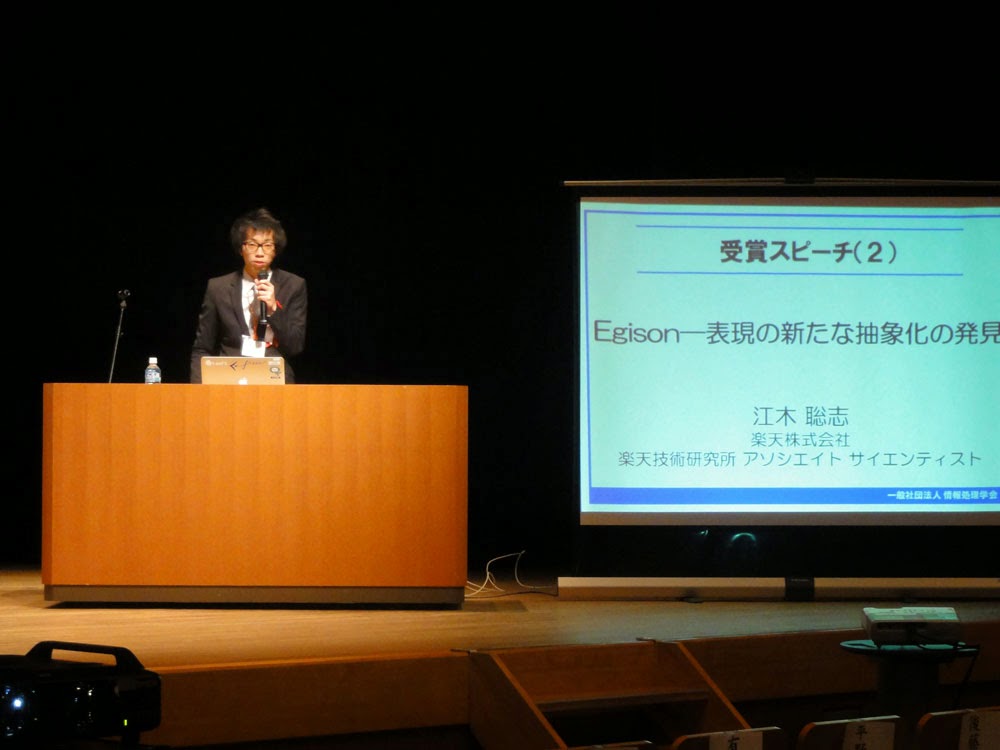 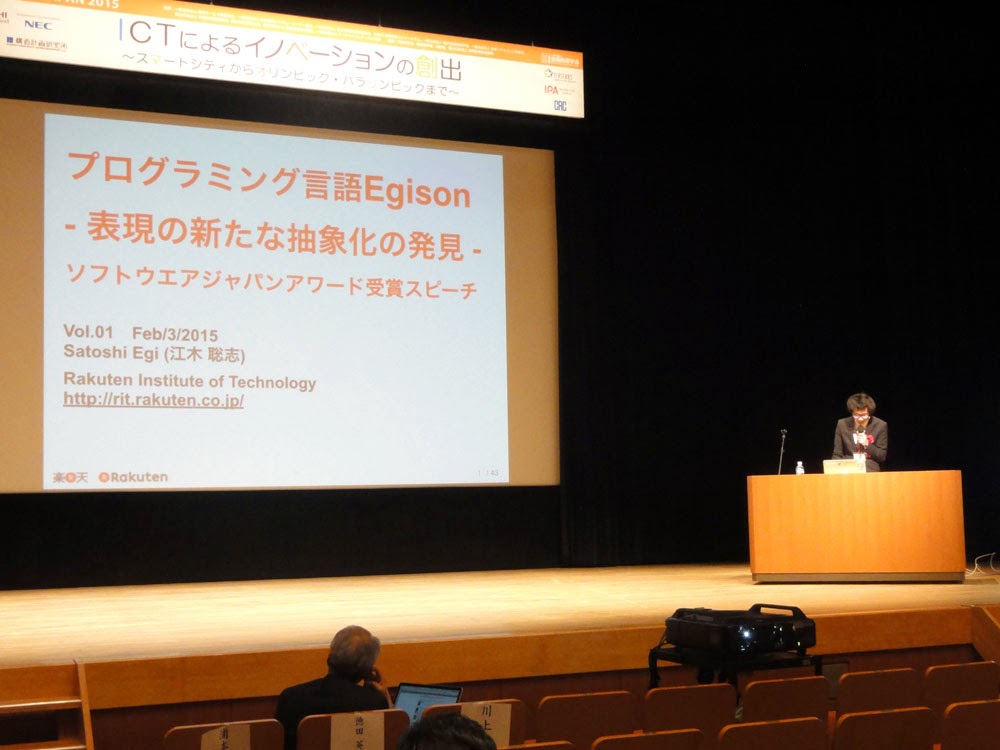 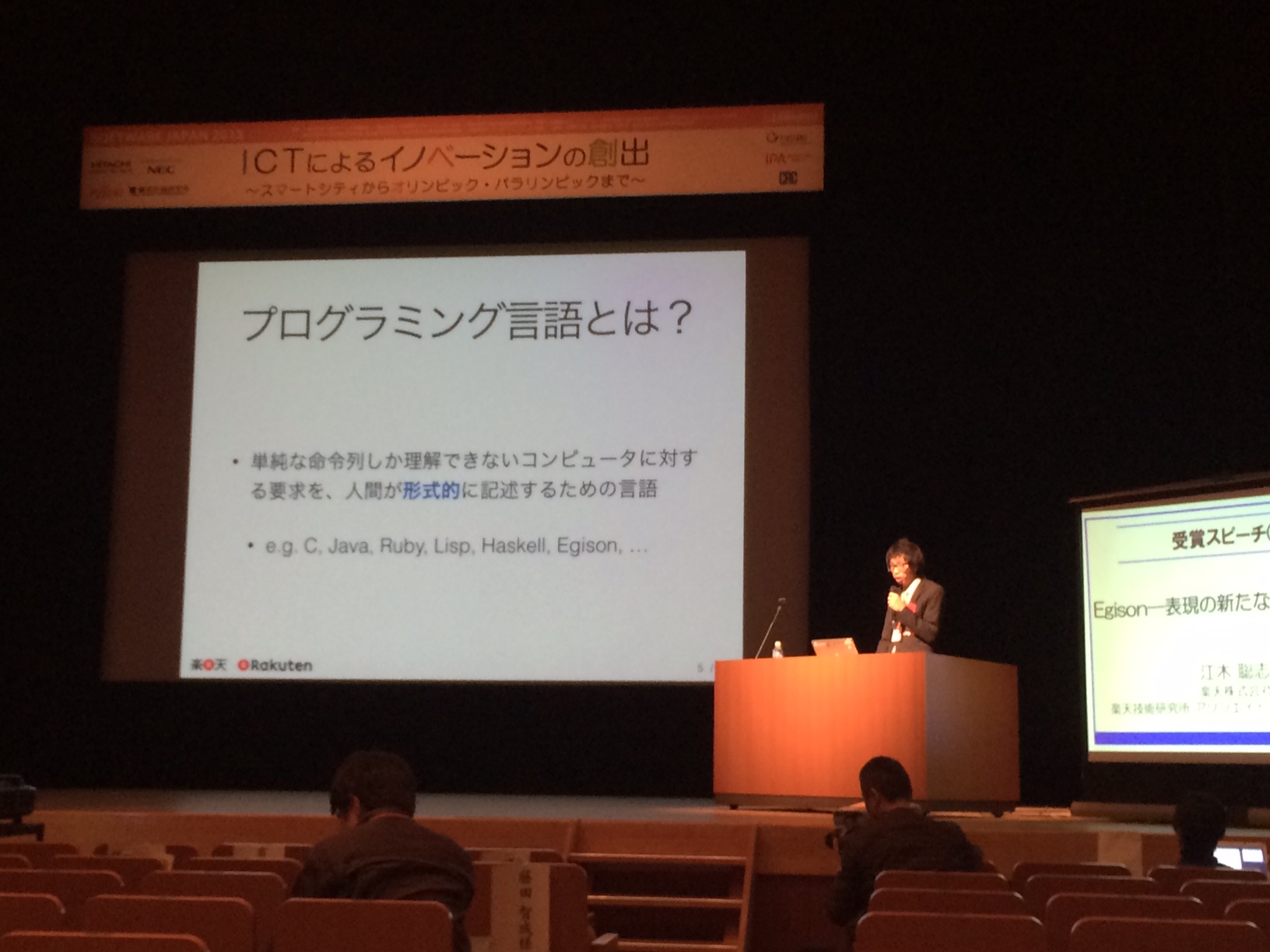 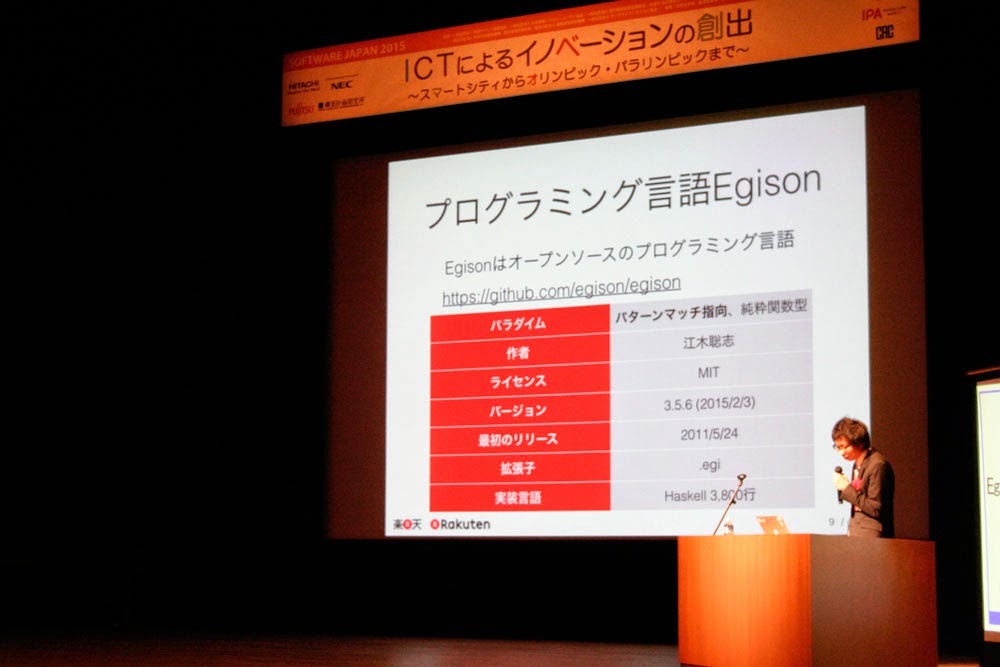 My next goal is to make Egison popular among the researchers of programming globally. It is necessary to proceed to the next step. I will work hard to write good documentations (especially papers) for this goal.

I will be happy if you are looking forward to it!

I have made a presentation at RubyKaigi 2014 on Sep 18. Today, I will write about that.

We can view my presentation abstract here.

I was asked "How long does it take to learn Egison?" by Koichi Sasada after my presentation. I would like to write here a clear answer for that.

I have implemented the gem to spread Egison pattern-matching to more people. I believe it is not so difficult and don't want to make people hesitate to learn it.

Finally, I would like to thank staffs and everyone at RubyKaigi. I had a very great time!

I've experienced the 3 exciting moments developing the Egison programming language. Today, I'd like to write about them.

The first moment is when I succeeded in running the program that determines poker hands.

I thought the lack of intuitive representation to express pattern-matching against non-free data types such as multisets and sets is the biggest hole of the existing programming languages. To fill this hole, I've started the design and development of Egison.

I have focused on the update of design of Egison website in this half year.
Today, let me look back it.

It was a very simple website. I have started the renewal of the Egison website from January. 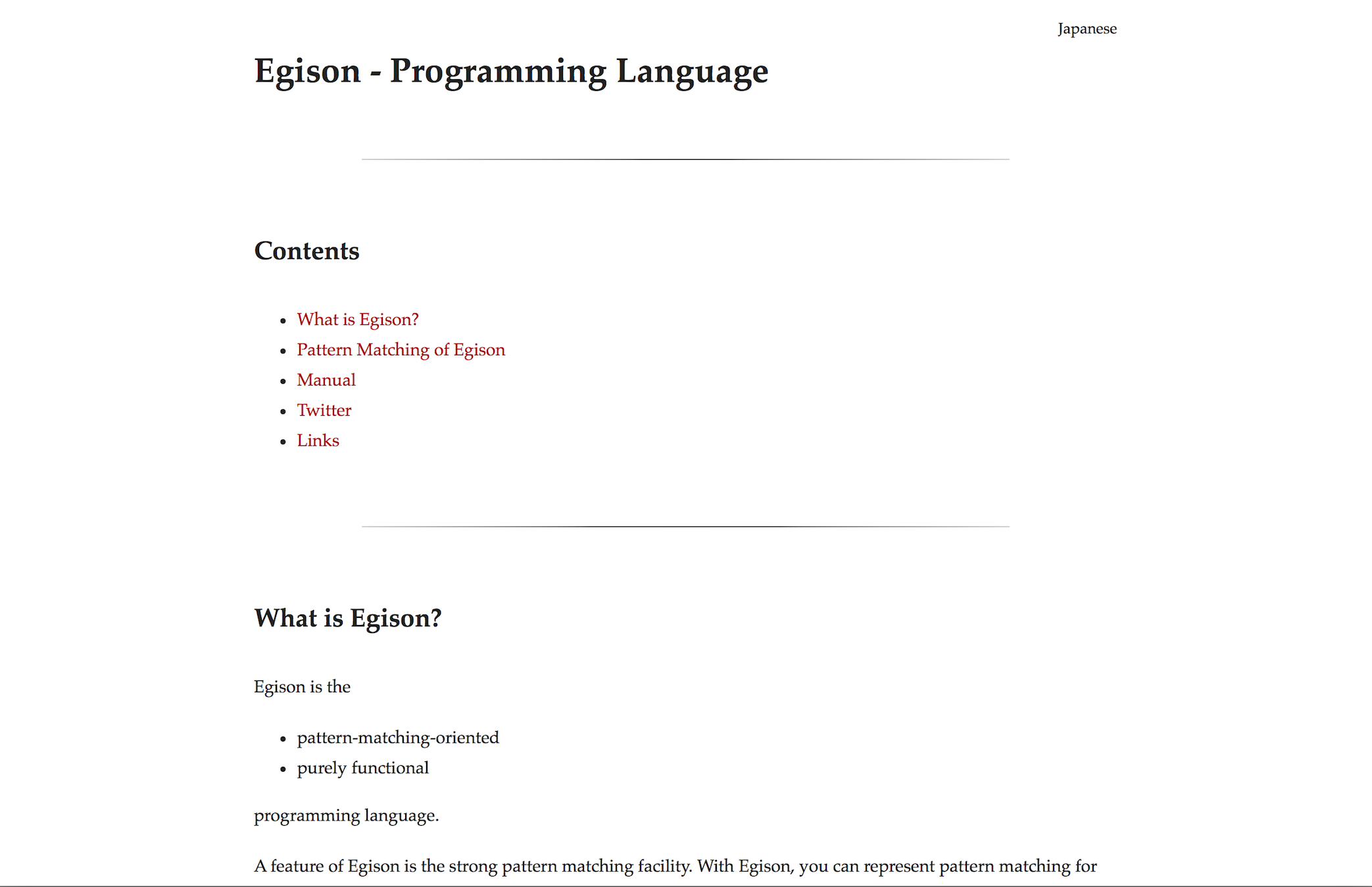 I've implemented a Ruby Gem that provides the ultra super pattern-matching to Ruby. We can directly express non-linear pattern-matching against lists, multisets, and sets using this gem. Today, I'd like introduce the power of this gem.

This is open source software. You can access the source code on GitHub.


The 6 Programming Languages Interesting to Try

Today, I'd like to introduce the six programming languages that I think interesting to try.

The only problem of Haskell is it is too hard to start to use for many people. We need to learn many abstract notions from the theory of programming languages.

However, its expressive power is really great. I think Haskell is the best choice when going to implement software with entirely new concepts.

Coq is a proof assistant. It provides a language to write proofs on computers and a checker to certify its correctness. I think this field has definitely a promising future.

What I think a problem of Coq is proofs written in Coq are not intuitive. We can't intuitively express propositions and proofs of elementary mathematics that we learn in junior high school. I'm thinking that I'd like to create a language to represent proofs intuitively in future.

Erlang is very useful to implement distributed software. Actually, I'm contributing the development of LeoFS, a distributed object storage developing in RIT and writing Erlang every day from Monday to Friday. Erlang helps us to implement software with high scalability and high availability so much.

Recently, the programming language Elixer and Lisp Flavored Erlang are getting popular. These languages provide Erlang features with different syntax.

I've played with it by tring to enable Mario to jump higher, to jump multiple times, to walk faster and so on. It's purely interesting!

We can view many video demonstrations. You can quickly get the concept of Viscuit if you see one of them.

Egison is the programming language that I've been developing. With Egison, we can directly represent pattern-matching against lists, multisets, sets, trees, graphs and so on. I hope this language's feature become a standard feature that all languages provide.

Egison is pioneering the area in the figure below.

Egison is the first language that realizes all features in the area of the figure above. I believe that the impact of this contribution has as great in the history of programming languages as other historical abstractions such as high-order functions from Lisp and Scheme and automatic type inferences from ML.

My Aim - Thought on Artificial Intelligence

The essential difference between humans and computers is that reasoning itself is a subject of observation for humans.

What I would like to say is that there are no ways to realize artificial intelligence but for to grasp the rules of reasoning one by one. And then, all results of artificial intelligence must give us great insight about how we should reason. Keeping these ideas in mind, I am researching every day aiming to build the ultimate theory.

Tweets by @Egison_Lang
This website in other langauge: English, 日本語